A man decided to go on a visit to Germany, to visit his brother who was stationed in a military base there. He assumed that most Germans would speak English, but found that many people spoke only their native tongue, including the ticket inspector on the train. The ticket inspector […] When the manager of the menswear store returned from lunch, he noticed that his clerk’s hand was bandaged. Before he could begin to ask about the bandage though, the clerk said that he had some very good news for him. “Guess what, sir?” the clerk said. “I finally sold that […] 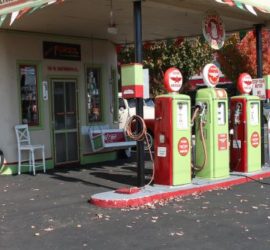 A gas station in Texas was trying to increase its sales, so the owner put up a sign saying, “Free Sex with Fill-Up.” It wasn’t long before a local redneck pulled in to the gas station, filled his tank, and then asked for his free sex. The owner told him […] An Amish lady is trotting down the road in her horse and buggy when she is pulled over by a police officer. “Ma’am, I’m not going to ticket you, but I do have to issue you a warning. You have a broken reflector on your buggy.” “Oh, ok, thank you […] A wealthy gentleman from Texas, who had recently moved to Los Angeles from his ranch in the boondocks, was invited to a Hollywood party. An attractive young lady spied him, standing there with his cowboy hat and swagger, and started flirting with him. “Tell me cowboy, is there ‘anything’ you […] If my body was a car, this would be about the time when I would be thinking about trading it in for a newer model. I have reached the ripe old age where I have got bumps and dents and scratches in my finish, and my paint job is getting […] A magician was working on a cruise ship that was on a tour of the islands in the Caribbean. Knowing that the audience would be different each week, the magician allowed himself to do the same tricks over and over again. There was only one problem though. The captain’s parrot […]

William and Howard are two college students in New York City. One day, they are riding the subway on their way to college, when a beggar approaches them and asks for spare change. William adamantly rejects the man in disgust. Howard, on the other hand, whips out his wallet, pulls […] One night, a torrential rain storm caused major flooding in South Louisiana. The next morning, the resulting floodwaters came up about 6 feet into most of the homes in the area. Mrs. Boudreaux was sitting on her roof with her neighbor, Mrs. Thibodaux, waiting for help to come. Just then, […] A man is crossing the hotel lobby, headed for the elevator and not fully paying attention to where he is going, when he accidentally bumps into an attractive well endowed woman. As he does so, his elbow ends up going into her ample breast. They are both quite startled at […]